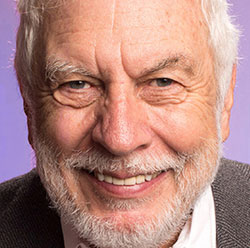 Nolan Bushnell was a featured speaker at RestaurantSpaces’18

Nolan Bushnell is a technology pioneer, entrepreneur and scientist.

Often cited as the Father of the Video Game Industry, he is best known as the Founder of Atari Corporation and Chuck E. Cheese’s.

Bushnell was the first and only man to hire Steve Jobs and wrote the bestseller, Finding the Next Steve Jobs, published by Simon and Schuster in 2013.

Over the past four decades, Bushnell has been a prolific entrepreneur, founding numerous companies, including: Catalyst Technologies, the first technology incubator; Etak, the first car navigation systemwhose mapping is still the basis for car navigation systems today; Androbot, a personal robotics company; and ByVideo, the first online ordering system, which allowed customers to order and pay for product from kiosks. His latest startup, Modal VR, is an end-to-end virtual reality platform that delivers large-scale and fully wireless immersion for multiple users at once.

Over the years, Bushnell has garnered many accolades and distinctions. He was named one of Newsweek’s “50 Men That Changed America”, honored with the British Academy of Film and Television Arts Fellowship Award (BAFTA) the highest accolade the Academy bestows, for his outstanding creative contribution to the Video Games Industry. He was similarly honored with a LARA award from the German Academy of Entertainment.