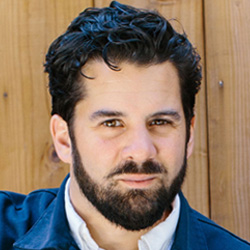 Charles Bililies is the Founder & CEO of Souvla. A Greek-American, Bililies comes from a family tradition of restaurateurs and is deeply passionate about the hospitality experience. Bon Appetit Magazine dubbed Bililies “the Mark Zuckerberg of fast fine restaurants” and Souvla is a San Francisco Chronicle “Top 100 restaurant”, a recipient of the StarChefs award for “Best Concept” and has been featured in such media outlets as The Today Show, The New York Times, The Wall Street Journal, Forbes and Bloomberg.

Bililies now leads strategic development for the restaurant group, focusing on new business opportunities, financial planning, team, culture, and brand consistency. He also now serves as an advisor (both officially and unofficially) to partners in the food and tech space, including Apple, Square, Caviar, and Plate IQ. He regularly speaks on panels and in the press about the future of restaurants and tech, entrepreneurship, and how to develop profitable restaurants.

Charles moved to California in 2006 and worked for Chef Thomas Keller at The French Laundry and Bouchon Bistro, as well as Chef Michael Mina at both his eponymous restaurant and RN74. He holds degrees in Hospitality Management from Cornell University and Culinary Arts from Johnson & Wales University.